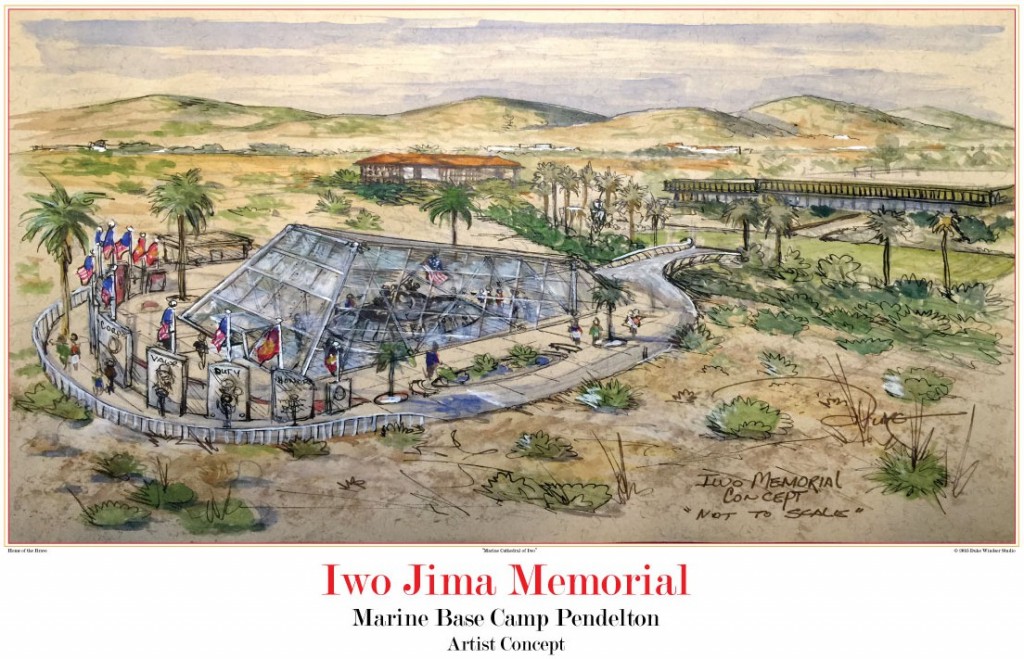 The vision for the proposed Iwo Jima Monument West Memorial includes the following:

Our architect has completed Request for Proposals (RFPs) in the form of a design competition (like the Marine National Heritage Museum), now available for distribution to interested firms. Once the finalists have been selected, those designs will be made available to retired Marines for comment in a preference poll. The Advisory Board with consultants will make the final determination as to the design to be constructed. To obtain the RFP, please send a request.

The 50l c3 as a matter of policy will not commence the purchase, design phase, and construction until no less than 90% of the funds needed to complete the project are either in hand or pledged. Once the process begins, financial shortfalls should be avoided at all costs. It behooves us for the sake of the Iwo Jima survivors and their families that this be completed no later than the end of 2016 so these Marines can relish the site and the acknowledgement of their sacrifice once again from a grateful Nation. The memorial will forever be a place that inspires, educates, and puts on display one of America’s most significant monuments to American courage and exceptionalism.

Final costs are dependent on two major factors: 1) final purchase price of the monument and the transfer costs to Camp Pendleton and (2) cost of the design/build of the memorial site, including hardscape/landscape, and any special accoutrements to be determined during final design phase.

With the purchase of the monument come collateral materials that are destined to be gifted to the Marine Corps Recruit Depot Museum in San Diego, CA. The items will be part of a special display area as determined in conjunction with the MCRD History Museum Foundation.

The Memorial project includes the establishment of a Maintenance Fund to ensure perpetual maintenance at no cost to the Marine Corps.

Any excess funds raised will be used to assist in the preservation of other Iwo Jima Memorials in custody of the USMC at other US locations, including but not limited to MCRD Parris Island, SC.

The original bronze Marine War Memorial at Arlington, VA was paid for by donations (96% Marines).
Asset: create a pie chart showing 96% funded by Marines… or chart using silhouette of monument.

This memorial will fill a void at Camp Pendleton for a significant Iwo Jima Flag Raising monument. Camp Pendleton is the base that came into existence after the attack on Pearl Harbor by Japan, Dec. 7, 1941. Most Marines trained here before going out to the Pacific War island by island, illustrating the effectiveness of the Marine Corps as an amphibious force, and creating through the famous photograph a relationship between the Marine Corps and Americans that exists today. The image has endeared America to the Marine Corps.

“The battle came to symbolize all that is good about our country and our Corps.  The story should be told again and again to our children and grandchildren.  It is a story simply of courage.”