Project: Build a spectacular Iwo Jima Flag Raising Memorial at Camp Pendleton, facing the Iwo Jima coordinates across the Pacific. Site it on a hillside viewable adjacent to the PVEC (aka SNCO Club), for Marines, and the public transversing I-5, and offshore, a permanent symbol of American courage and sacrifice.

Fentress Architects has previously designed and built the magnificent National Museum of the Marine Corps, Triangle, VA. One of the most respected and honored US architects in the field of public buildings, Fentress has taken the vision of Iwo Jima Monument West, non-profit, and turned it into a proposal that will become the most significant symbol of the USMC on the Pacific coast.

Lit at night 24/7, the monument will shine like a beacon of freedom to all who see it, an icon of American history, and resonate with all who see it. The tantamount example of courage, it will stand for hundreds of years so that the legacy will never be forgotten!

Fentress presented his design at a national unveiling in front of 13 Iwo Jima veterans at “The Celebration of Courage” event, Newport Beach, CA sponsored by Iwo Jima Monument West, October 31, 2015. His remarks can be seen here by all Marines and Americans . Support building this magnificent tribute that displays American courage and determination. That is the USMC!!

MISSION: OPERATION HOME OF THE BRAVE

To fund an Iwo Jima Flag Raising monument and memorial site at Camp Pendleton to make all who see it reflect and pay their respects to Marines who have, and will continue to make the ultimate sacrifice in defense of the United States of America;

To not only inspire but educate all Americans that we are, as our national anthem says, “the home of the free, the home of the brave”, through inscriptions and visual aids that tell the story on site;

To teach that the famous image of the flag raising by Associated Press combat photographer Joseph Rosenthal “electrified” was weary Americans and became the symbol of the most successful war bond drive (“The Mighty 7th”) in WWII; the image from the photograph was adopted in multiple modalities and became essentially an American icon; it was the most reproduced photograph in all of WWII;

Visible to millions at the proposed location, near Interstate 5, and lit at night for aircraft and ships to see, we at Iwo Jima Monument West are projecting that it will become a landmark, at night aglow in lighting, servicing as a beacon of freedom that reinforces that “uncommon valor” remains in the American spirit. May God continue to bless America. 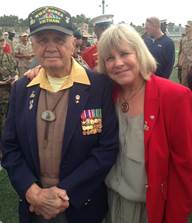