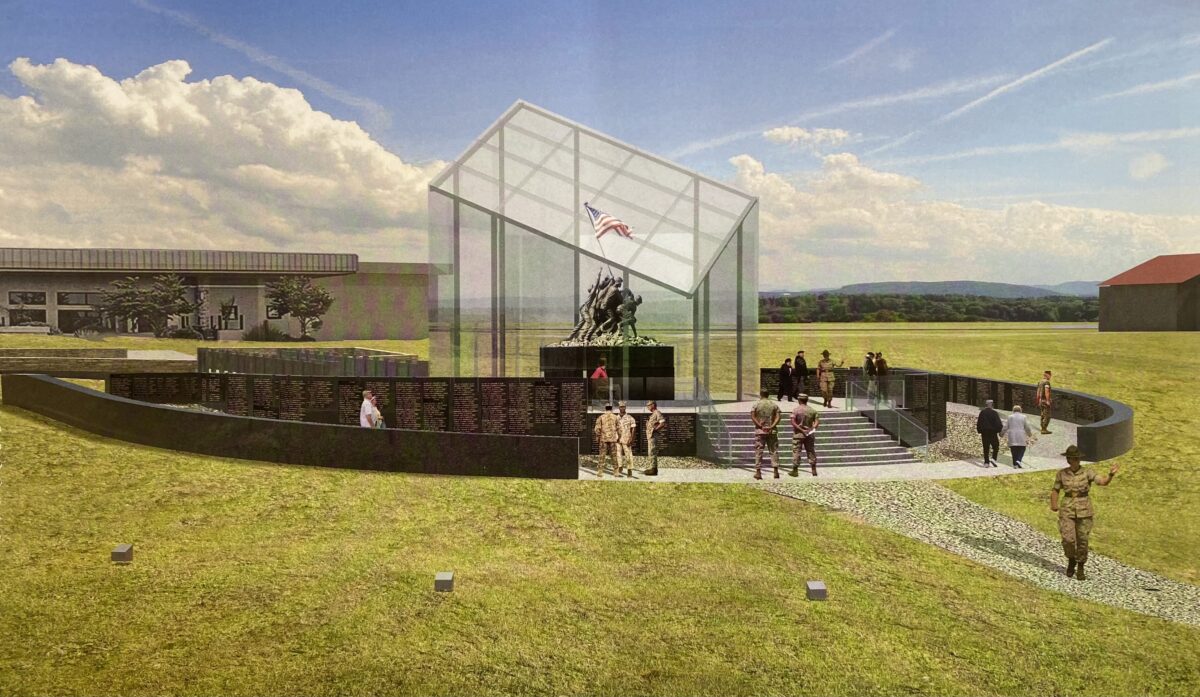 Laura Dietz is determined to gift a permanent reminder of America’s unique history to Southern California.

For the past few years, she has worked tirelessly to erect an Iwo Jima Flag Raising Memorial at Camp Pendleton in San Diego County.

The monument will consist of a sculpture that recreates the iconic photo of six members of the U.S. Marine Corps (USMC) raising the American flag on Mount Suribachi during the Battle of Iwo Jima in 1945.

But for Dietz, founder and trustee of Iwo Jima Monument West, the mission to commemorate that moment in time holds a higher significance.

“This monument is more than a monument,” she told The Epoch Times. “We know what it means to the Marine Corps, but it’s a symbol of our entire country, of what we can do when we are united.”

‘The True Meaning of Sacrifice’

Prior to establishing Iwo Jima Monument West in 2013, a charity dedicated to raising the funds to see the project to fruition, Dietz spent much of her time volunteering in support activities for the families of those who serve.

“I saw the realities of military service, and I saw the pressures that these constant deployments were putting on the families,” she said. “As a mother—and now a grandmother—I really can relate at that level. … I learned [about] the true meaning of sacrifice.”

She saw how the absence of Marine Corps members serving their country affected their families.

“Dad’s not home, and the mother has to be so emotionally strong—I mean, incredibly strong,” Dietz said. “Because you have to make your kids think that everything is really okay, Daddy’s fine, and Daddy’s coming home.

She said the personal side of military life hit home and inspired her to devise a “manifestation of the great esteem with which I hold these military families and what they go through.” 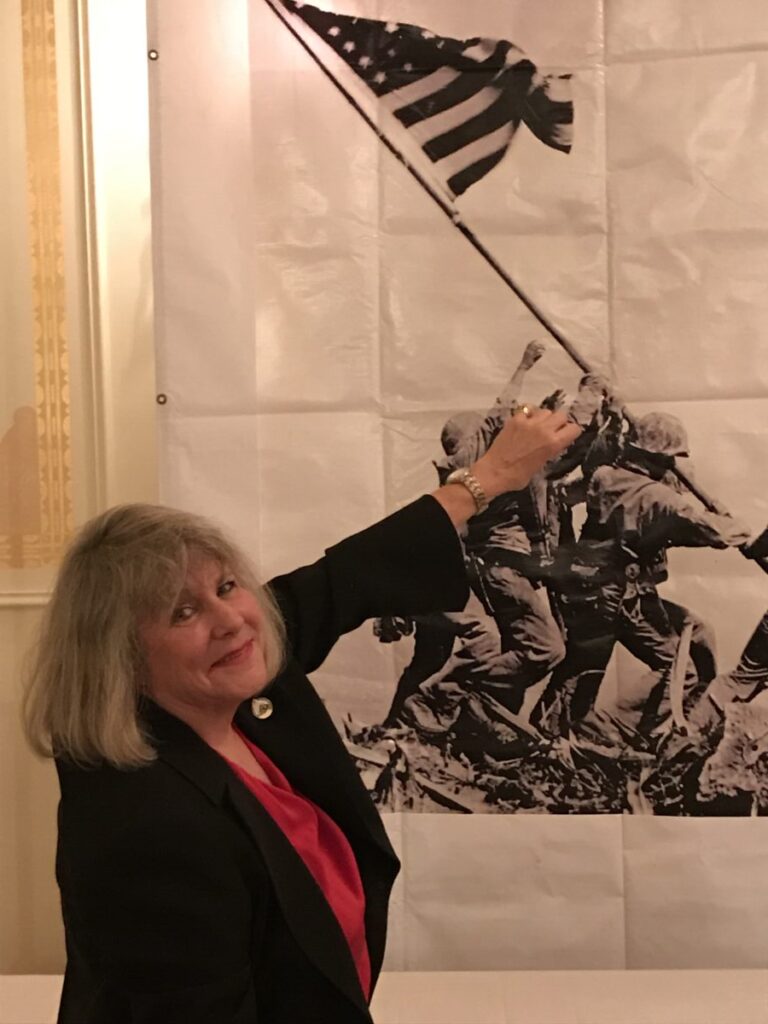 A Special Tribute in California

Before she was a resident of Corona del Mar in Newport Beach, Dietz lived in Arlington, Virginia. During her time there, she passed by the U.S. Marine Corps War Memorial on a daily basis.

The 32-foot-tall sculpture of Marines raising the American flag at Iwo Jima lodged itself in her mind.

“It became a symbol of America winning,” she said, referring to the original photograph taken by Associated Press photographer Joe Rosenthal on Feb. 23, 1945. “That [photo] wasn’t ‘a thousand words.’ It was like a trillion words. It said, ‘We’re winning, and the war might soon be over.’ And war-weary Americans at home were electrified. … Newspapers printed extra copies of the photograph for sale due to high demand.”

The power of that image resonated with Dietz. So when the time came to concoct some way to immortalize the sacrifice and courage of American troops, she knew exactly what image to draw from.

First, she said she tracked down the ideal architect for the job: Curtis Fentress, whose firm designed and built the National Museum of the Marine Corps (NMMC) in Triangle, Virginia.

“He was my first choice in the concept design competition, along with four other national firms with USMC connections,” Dietz said in an email. “His work to design and build the magnificent NMMC made Fentress the best qualified in the U.S.”

On Oct. 31, 2015, Fentress unveiled his design in front of 13 Iwo Jima veterans at “The Celebration of Courage” event at the Fashion Island Hotel in Newport Beach.

“[It’s an] opportunity to create something special and unique for you here in California,” he said at the time. “We got this idea that this was something very unique and very special for the Marines and it had to be encased in a way that [preserved] the sculpture of the Marines planting the flag.”

He described a design that includes a protective glass enclosure that keeps the monument safe from saltwater spray while also allowing the public to view it from a distance.

“I made the point that the monument was what was important, that the structure where it was housed was not to deter from the monument,” Dietz said. “[So] he created a highly minimalist design.

“The added benefit of the glass system is [that it makes] the monument visible from all angles, while giving it some protection from heat, cold, [and] moisture.”

Dietz pointed out that the memorial would be perfectly situated on a hillside west of Camp Pendleton’s Pacific Views Event Center, making the sculpture visible to the nearly 50 million vehicles that pass by on Interstate 5 annually.

“It will elicit that sense of American pride,” she said. 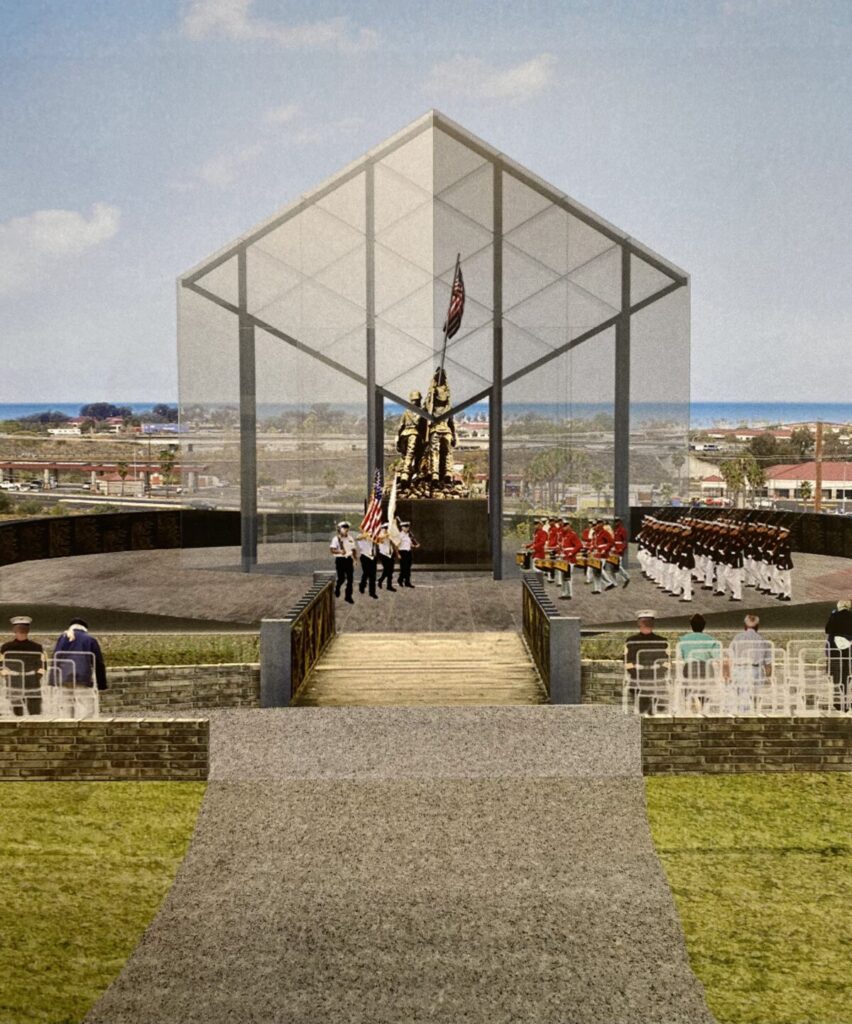 A Gift to Marines

Though the authorization for the project is currently tangled up in bureaucracy—“the gift laws are Navy laws and they made some changes three years ago [that] made them stricter,” she said—Dietz remains certain that the Iwo Jima flag will rise again—sooner rather than later.

“I’m confident that we’ll get a final approval from the Department of the Navy and be able to complete the fundraising and get it started by the end of the year,” she said. “That is my expectation, that is my desire, that is my hope.”

Thus far, they have raised $200,000 through their website. To trigger the final approval, Dietz said they have to prove they have 90 percent of the $11 million projected cost.

“The Marine Corps’ 250th birthday is coming up in 2025,” Dietz said. “So if you want to give the Marine Corps a gift for all they do and all the sacrifices they make, it seems to me that this is one way of doing it.”

She said that one of the most important factors that inspire her efforts is the precious time she was able to spend with veterans and families of those who served in the Iwo Jima battle.

“Their desire to see this monument up at Camp Pendleton where they trained in World War II is the most powerful motivation possible,” she said. “I pledged in 2015 to do everything I could to make this happen for them, their families, the Corps, and our entire nation. For them, it’s a last wish.”