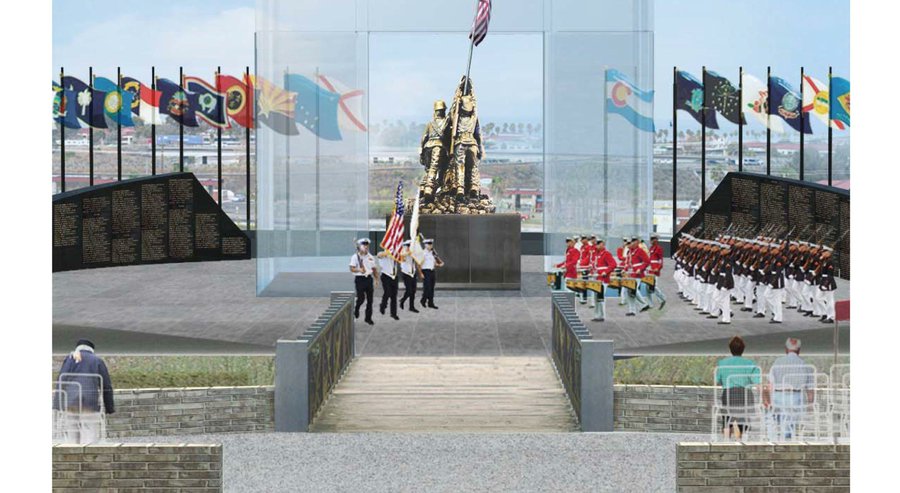 CAMP PENDLETON — A nonprofit supported primarily by retired Marines and civilians across the country is working on moving an Iwo Jima monument of the flag raising on Mt. Suribachi from the East Coast to Camp Pendleton, where thousands of Marines trained on their way to fight at Iwo Jima, one of the bloodiest battles of World War II.

The nonprofit is raising money to buy a restored Felix de Weldon sculpture of the Iwo Jima Flag raising, truck it to Camp Pendleton and install it on a hillside by the Pacific Views Events Center overlooking the ocean near the Naval Hospital Camp Pendleton and Interstate-5. The estimated cost of the project, including building the memorial site is $10 million.

The five-ton, 20-foot tall monument made out of plaster with a bronze patina finish, captures the placing of the American flag on Mount Suribachi during the Battle of Iwo Jima. The 36-day battle from Feb. 19 to March 26, 1945, took the lives of nearly 6,000 Marines and 1,000 members of the Navy and injured an additional 19,200 service members.

“The monument symbolizes all the bloodshed on the island done for the freedom of our country,” said Oceanside veteran Marine Sgt. Maj. “Iron Mike” Mervosh, 92, who fought at Iwo Jima, Korea and Vietnam and serves as national honorary chairman of Iwo Jima Monument West.

The Marines and Navy corpsman in Rosenthal’s photograph, were from the 5th Marine Division which was activated at Camp Pendleton in 1944, making it especially fitting to have the statue on base.

“It’s meaningful to have the statue on base because this is where we trained to go to Iwo Jima,” said Herman “Doc” Rabeck, 92, a Carlsbad veteran who tended to the wounded as a Naval Corpsman at Iwo Jima.

Both veterans consider the memorial to be a symbol for future generations, but they are hoping to see it as well.

“We are building a memorial site that will reflect the monument’s importance to the Marine Corps and the nation as one of America’s greatest and most profound symbols of courage,” said Laura Dietz, founder of Iwo Jima Monument West.

Dietz got to know Camp Pendleton Marines while volunteering with fellow community members from Newport Beach as part of their adoption of the 1st Battallion, 1st Marines. She went on to support programs for recovering Marines and families at the base’s Wounded Warrior Battalion.

Dietz, a history buff, got the idea for the monument after hearing that it had not sold at an auction in New York and was sitting in storage in Connecticut. The statue stood on the USS Intrepid Museum in the New York City Harbor from 1995 to 2007, on loan from its owner.

Dietz knew Camp Pendleton did not have its own flagraising monument, and felt the monument’s home, historically and emotionally, should be on base.

“I wanted this to be our thank you to the Marines,” Dietz said.

The design of the proposed memorial site will be unveiled at a fundraiser, “A Celebration of Courage” Oct. 31 in honor of the Marine Corps 240th anniversary and the 70th anniversary of the battle of Iwo Jima.

Rabeck and three Iwo Jima Marines will be among the speakers. Mervosh will sign copies of his biography “Hardcore Iron Mike” by Gregg Stoner.

Retired Marine Lt. Gen. Terry Robling will give the keynote address and Retired Marine Col. Michael Naylor will give a short history of the project and need for public support. The event is 11:30 a.m. to 2:30 p.m. with luncheon at The Island Hotel, 690 Newport Center Drive.

Auction items include a flag flown over Mt. Suribachi at the 70th Anniverary Reunion of Honor in March and the famous photograph by Rosenthal along with an hour glass filled with “black sands of Iwo Jima.”